COME WITH YOUR SHADES ON – JOE GOTHAM 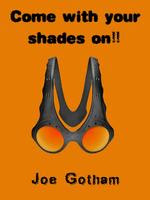 With independent fiction, freedom from genre restrictions and editorial direction can produce either new forms of expression or unfocussed ramblings, perhaps well-written, but going nowhere.

CWYSO is a delight for anyone looking for the former. This is not a light read; time and characters slide in and out of place and there is at least one complex mystery to solve. I’d say it is perfect for Johnny Vegas fans who wish they could cut the soap opera out of 'Ideal' and turn the drug lords up to eleven.

The plot cannot be better summed up than as it is by the author himself:

“A black comedy following the adventures of a disparate group of people in the Netherlands in the days following 9/11. A faded rock star, Dr Kosmoss, his blind companion, Christian, and a Nigerian King called Lord Ahmed go to the Netherlands to rescue a girl kidnapped by a porn star. Since Dr Kosmoss lost his memory in the WTC attacks, all he has to go on is a note telling him to go to the Netherlands and find a man called Bran Van Haappen. Meanwhile, a drug dealer called GSUS and his three pals have to come up with ten thousand guilders in three days to pay back the local big cheese or they're all dead.”

How well comedy works is always down to the individual reader and I did not find the book laugh out loud funny. It walks a fine line between dark comedy and violent/bad taste humour and in my opinion the line is crossed more than once. It is the sort of gross/cum-splatter humour that might work best in the locker room or among shipyard welders. That said, there were times when I laughed unexpectedly, and overall I did find the story both engrossing and amusing, and not at all offensive.

There is one thing I can say for certain about CWYSO: you will not have put the pieces together and solved the puzzle before you reach the end. When you get to the final reveal, there are several, if you have enjoyed the style of humour, the author’s cunning will amuse you all the more. If you have struggled, you will groan.

There are peculiarities; each character is introduced, described from head to toe including the inevitable t-shirt logo and shoes, and ascribed a likeness to a celebrity. Because it is done so often and by rote, I guess it is by design rather than accident, but it does stand out as unusual when reading. Puns are repeatedly explained, which might help readers who find the wording obscure; references to art and philosophy are also explained, almost as if the author would like the reader to note his academic range.

I enjoyed Come With Your Shades On and recommend it - if you like dark comedy, if you can follow UK accents, and if you don’t squick easily.

Joe Gotham says of his work, “I’ll let my writing speak for itself.” It’s good advice.