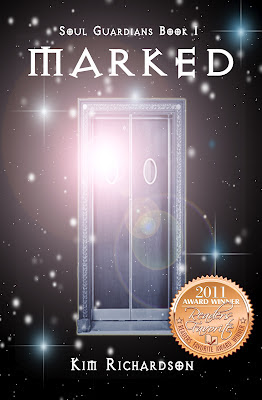 Sixteen year-old Kara Nightingale’s ordinary life is suddenly turned upside-down when she dies and wakes up in a strange new world with a new career—as a rookie for the Guardian Angel Legion. Kara is pulled into the supernatural, where monkeys drive the elevators, oracles scurry above giant crystal balls, and where demons feed on the souls of mortals.


With the help of her Petty Officer and friend, David, Kara hurtles towards an adventure that will change her life forever…

What a delight. Kim Richardson’s book, Marked, has already gained itself an appreciative young adult audience, and for good reason. It is a five-star-reviewed finalist in the 2011 Readers Favorite Awards, judged in September.  This is a very well written and fast paced fantasy with plenty of vivid description and just the right amount of romance.

Kara’s journey into the realms of the angels and their orders has been well presented, beginning on page one with no unnecessary preamble. Each chapter finishes at a high point, either holding tension or resolving one plot point and leading smoothly into the next. There is an excellent rhythm, too, with high action chapters balanced nicely against the periods in Horizon, where Kara learns about her new life and the roll chosen for her.

There were two shortcomings, which because they are at the end and integral to the resolution are difficult to describe without giving the plot away, but are so important story wise, their lack had a significant impact on the story itself.

Firstly, I was disappointed that there was no explanation as to how the elemental could enter Horizon, or even if he did. Despite his absolute importance, his end is not clear. And also, Asmodeus did not have his own legions around him. I expected a colossal last battle and yet, in the end, David and Kara had faced more complex and dangerous conflicts together earlier, with far less at stake.

It is a little disappointing, but all the issues important to Kara herself were tied up nicely. This is the first of the Soul Guardian books and I am hoping Kim Richardson will build on the exciting base she has established for her series, and will raise the intensity higher with each successive volume.

Kim Richardson is the author of the Soul Guardians series. Born in Quebec, Canada, she later studied in the field of 3D Animation and became an Animation Supervisor for a VFX company. For many years she worked on big Hollywood films and stayed in the field of animation for 14 years. Since then, she has retired from the VFX world and settled in the country where she writes fulltime.

If you have any questions for Kim, please send her an email: kimr3d [at] hotmail.com
Email ThisBlogThis!Share to TwitterShare to FacebookShare to Pinterest