WRITERS ON THE WRONG SIDE OF THE ROAD - ANTHOLOGY 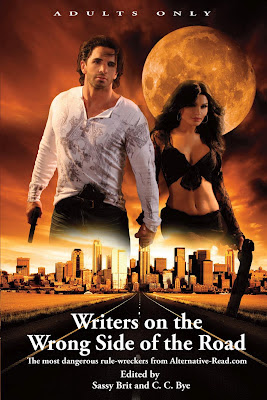 “Alternative-Read.com (AR) is a website developed as a vehicle for promoting all comers from the writing world. This collection brings together the Writers on the Wrong Side of the Road, the most dangerous rule-wreckers from Alternative-Read.com who sprang at the chance to create an anthology designed to give the reader “a different kind of reading experience.

And just to make sure that happened, AR took away the rules and let them write whatever the hell they liked. Edited by Sassy Brit and Clayton C Bye.”

Reviewed from ARC requested from editors.


Overall, Writers on the Wrong Side of the Road was a really enjoyable read which I’d rate an easy four stars, with eight of the seventeen stories presented scoring four stars or up. Where there were problems, it seemed always to be with endings, endings too abrupt in otherwise well-written tales. Though I will admit to expecting something more outlandish.

The standouts, for me, were:

The Barefoot Hero by Timothy Fleming – This was flawless, a touching reminiscence of one young life ruined by war, and a simple act that said so very much (5)

The Cenotaph by Casey Wolf – Another war story of sorts. A young man who is uncertain about his future camps by an isolated cenotaph. In an interesting clash of past and present, he meets the lone survivor of a town who lost their sons to war, and who remains, endlessly tending their monument (4)

Take Two by Kit Germain – An inventive twist on post-apocalyptic survival of the species. Well executed and fast paced, this story looks at the twin horrors of religious intolerance and a genetically modified world (4)

Triona’s Beans by Casey Wolf and Paivi Kuosmanen – I understand that there were no boundaries put on this selection, but in my opinion, this is out of place here. As a story for the 5-10yrs age group, it is an engrossing look at tolerance and empathy for people who are different, but lost and utterly displaced. An excellent children’s story, not substantial enough to translate to an adult audience (4)

The Smile in Her Eyes by John B Rosenman – This was lovely. An old man sees his dead wife in the eyes of a teenage girl, then struggles with the certainty of his vision and the socially unacceptable relationship he must pursue (5)

Slumfairy by Tonya R Moore – This story requires a leap of faith; you go into a crisis with the characters and are carried along with them. There is little time to acquaint yourself with the world they are fighting through, but if you trust the author, enough detail is supplied to keep everything together. I enjoyed this thoroughly, but felt it could be part of a larger work (4)

Pronghorns by Casey Wolf – Probably my favourite story in this collection, not least because it met my expectation of something dark and utterly unique. It is a superb study of the thoughts and emotions of three people involved in a murder-suicide plot (5)

There are no stories in this lot that do not deserve to be read; they are all of a worthy standard. I believe some needed tighter editing, which they didn’t get – possibly for ideals of free expression.