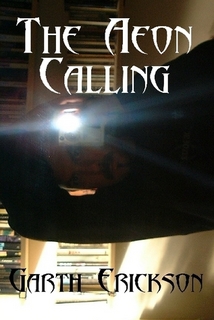 Alex Brown is hit with unbearable trauma, self-conscious and obsessive, at once the haunted and the haunter, he time-travels from personal tragedy through war in Africa, rain in Glasgow, and a shit-load of monkey business in-between to domestic psychosis. Armed with the Tarot (a guide for the misguided) and a ghostly pair of pistols, Alex sets about trying to reset his world. Sex, Death and Time - A dark, multi-layered journey through the obsessed and haunted mind of Alex Brown. Alex's mind is alive with the pre-apocalyptic world, but focussed only on Susan - the one woman he cannot have.

The Aeon Calling was my second attempt at writing a novel, the first being an odd little sci-fi thing called Transfer at Pandora Central. Which is not to say that The Aeon Calling is not odd - I did my best to ignore all perceived novel writing wisdom and portray what I saw in my head - supernatural, sexy, sometimes semi-autobiographical and, of course, with the usual helping of pseudo-philosophic-psycho-babble.

Any episodic entertainment takes a risk. Every time an ad breaks the stream of my concentration on the telly I am likely to lose interest and wander off, or turn to another program. The same happens with series and serials. If one episode is bad, the incentive to tune in again next time is at risk. And so it is with serial fiction. But when you find good webfiction, like that found at WFG, fictionaut, Year Zero Writers, or flashing by, it’s addictive. That is how and where I found the author of this month’s review book.

I first read Garth Erickson’s serials from a link at flashing by. I was immediately struck by the beauty of his words, and a sense that I was only just holding on to the pieces of each story as he brought them together. That sense of clinging to understanding by the tips of the fingers but learning to trust the author and enjoy the work came with familiarity, and reading his work in novel form is no disappointment.

I loved The Aeon Calling, as I thought I probably would. Erikson’s summary of this book is, “Sex, Death and Time - A dark, multi-layered journey through the obsessed and haunted mind of Alex Brown. War in Africa, rain in Glasgow, and a shit-load of monkey business in-between. Alex's mind is alive with the pre-apocalyptic world, but focussed only on Susan - the one woman he cannot have.” Multi-layered does not begin to describe it.

Alex Brown hears the voices of his ‘ghosts’ long before any trauma has entered his life. They are always there, even the ghosts of his toys, broken in anger. As he spins through the chaos and pain of his life, they are constant - as is the guilt for things over which he had no control, the Tarot cards he took from beside his dead mother, memories of the Angolan war, and the love of his wife, who is perfect in every way – except she is not the one woman he obsesses over.

Each subject creates a layer of meaning and confusion in Alex’ life, and as we slip into his madness, time itself has no relevance. Memories come and go, there is no firm NOW in this book until the very end. It is a journey through a man’s psychosis. There is no firm REAL for Alex; he recalls his life and experiences his madness, at times omniscient, at times powerless in the face of consequences.

Don’t be alarmed at the thought of this lack of line. All the separate threads begin to tie together and an order emerges naturally as we follow Alex’ age in each memory. There are clear and clearer markers given at each point to give the reader a firm enough grasp on where they are in the narrative.

The Tarot itself, specifically the Aeon card referenced in the title, gives some insight into Alex’ view of reality:

The Aeon (or Judgement, Last Judgement, Atonement, Resurrection) is numbered twenty and often shows figures arising from graves in answer to the clarion call of an angel. The Aeon forces us to acknowledge that our actions set up a chain of cause-and-effect for which we are solely responsible. Here we pass through the fire of purification, shedding dead and dying wood as we go. We judge ourselves frankly, forgive, and leave the past behind. And then we are free to step into the light.

There will come a moment, if we are true to ourselves, when we know exactly what we need to do. And when that moment comes there will be no further prevarication, no doubt, no fear. This is because time itself has enormous power. To find the right time for anything is a really useful life skill. When a choice comes to its own moment, it becomes empowered by its own momentum, and at that moment we can move forward with confidence. Sometimes, then, just of itself, this card will bring about changes on the day that it rules.

Reading some of Garth’s bio will also give some insight into the depth of feeling revealed by the author through his character. The Aeon Calling is not autobiographical, but it plainly draws on a number of experiences and beliefs held by the author [AKA Pisces Iscariot] himself.

I not only enjoyed it, I recommend it without any reservation, and no ifs or exceptions. Superb.

About Garth Erickson: Just for the record: the most I will try and sell you is one of my books; I have no other agenda; I’m not a teacher, a preacher or a double glazing salesman. Neither do I aspire to be any of those. Which is not to say that I have nothing to give; I believe that the events that shaped (and continue to shape) my life have resonance beyond the (meta)physical presence of Pisces Iscariot. We are all involved in history. With this in mind, anyone expecting guidance, enlightenment, epiphanies or healing might as well leave now.

Some basic facts: • I was born in Durban in 1962. According to the rules of the game this makes me a South African. • I am a pacifist I don't want to get killed in anybody's territorial/resource war • I am an atheist; I owe my soul to no god.

Other works:
Cabin Fevre
Dali's Egg
Out of His Mind
An Atom in Unwonderland