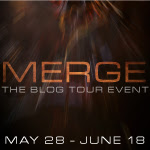 About MERGE
Set in a world still reeling from the discovery of transhumans, MERGE charts the loves, the betrayals, and the struggle for survival as transhumans are rounded up and sent to live in ghettos. Tensions are high, riots are brewing. The human race is about to come undone.

Written collaboratively by AM Harte, Kit Iwasaki, MCM, and Yvonne Reid, the thirteen-story series will follow four distinct, stand-alone storylines, and will be published in quick succession between May 28–June 18. Only by reading the final installment will you understand how the stories merge.

You can follow the blog tour by checking the dates at 1889 Labs.


Review
I had already enjoyed reading the work of AM Harte, MCM, and Kit Iwasaki when I heard about the MERGE project, so I was delighted to draw Yvonne Reid as a subject for review. I had no experience of anything she’d done, and I began reading with high hopes. By chance, the order I had loaded her three stories meant I began reading ‘The Beggar’s Run’, the third part of Yvonne’s trio of stories, first.
It opens on a scene my imagination took straight out of ‘Blade Runner’, with bounty hunter Harrison [see the link?] drinking, depressed, and staring at a ‘sky turning to rust with smoke in the air’. It was hot but he felt cold, he was injured, and he had no heart for the work he had to do.
Each story in the Merge package stands alone and it was easy enough to read and enjoy ‘The Beggar’s Run’ from a cold start, but when I went back and read each story in order, I found Harrison was not as much like Deckard as I’d thought. Luckily, there were enough similarities in the characters and action to allow me to keep my comfortable image of his face and his city as I returned to the first story, “Long Way Down” and began to read again. 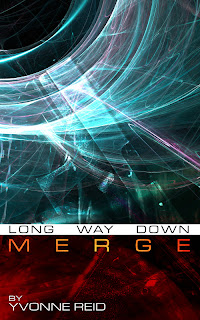 “Long Way Down” begins with a more motivated Harrison introducing himself as a homicide detective and following instructions that come through an earpiece. Only after he meets and speaks with his target do we begin to understand that he is not a policeman, and that his actions - counting the floors of a building, jamming the lift doors open, bluffing his way past questions - are the hunting skills that go with his job: finding and ‘relocating’ transhumans to the ghettoes ‘for their own good’.
In a short space of time we understand some of what it is like to be transhuman, why some transhumans might choose not to be relocated, and that Harrison is not as cold and efficient as he first seems. There is also the hint that there are dangers far greater than privateers like Harrison. 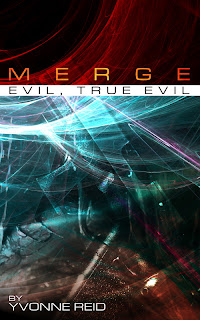 The second installment, “Evil, True Evil” takes us deeper into the moral quagmire Harrison has to negotiate. The policy of isolating transhumans tears families apart, and transhuman children are both dangerously unpredictable and pitifully innocent. Ramos Vasquez is only a little boy, afraid for his mother if he’s taken away, and shattered by guilt, believing God has cursed him for being naughty. In this story, however, Harrison comes face to face with someone more evil than little Ramos could ever imagine. 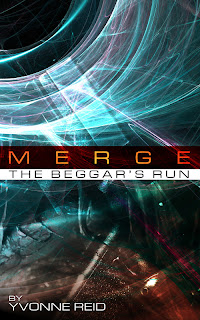 Then back to "The Beggar’s Run". It is easier this time to understand Harrison’s depression and the bitter taste his job leaves in his mouth. He is injured. He feels a failure. He isn’t in any shape to manage even the simplest job. This is, of course, when fate forces him to take on the hardest task he could imagine. He cannot rest to let his body heal and he cannot afford to fail.
With the backstory securely in place and the characters all familiar, this story more than the others is pure action and adrenaline. Adrenaline is, after all, the only thing Harrison has to keep him moving. From the moment he realizes what he has to do, time is against him and the decaying city has to be crossed, somehow. He has always relied on security cameras, endlessly uploading to the net, to do his job. Now those same cameras leave him nowhere to hide, and there is evil stalking him every step of the way to the gates of the sanctuary.


Since I read these three stories by Yvonne Reid, I have taken the opportunity to download the other stories from MERGE: Week one. None of them were disappointing. I, for one, cannot wait for the rest of the collection to be released.

About 1889 Labs
1889 Labs is an independent publisher dedicated to producing the best strange fiction conceivable by the human brain. Catering to a specific demographic of men and women between the ages of 3 and 97, we print everything from kids books to serious stories for adults. Our goal is to bring you on an amazing adventure onscreen and off. We hope you’ll take us up on the offer. For more information and our full list of titles, visit http://1889.ca.

Disclosure
It is important to note that I write a monthly book review for 1889 Labs which is provided free, and I have not received any payment or incentive for agreeing to review titles from the MERGE series.

Giveaways
For information on how to enter, go to MERGE.