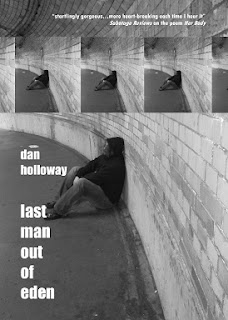 Poems about hope in the face of disappointment from award-winning performance poet and Literary Death Match winner , with a lyrical confessional style that takes in equal amounts from Ferlinghetti, Tracey Emin, and Patti Smith’s Just Kids. These poems celebrate the healing powers of time, non-violence, and remembrance but above all carry a simple message:

"Celebrate the lives of those you love because one day they won’t be with you any longer and you’ll be left writing poetry about how you wish you’d loved them more." [Also available as a CD and pamphlet]

Last Man out of Eden  - for a teaser check his tumblr.

Every time the wind changes direction these days, another theory emerges on how the ebook and the digital revolution have changed the fundamental way stories should be shared. Print, that is. While many orators wax lyrical about the pleasures of paper and the destruction of Literary cathedrals and publishing edifices, Dan Holloway is likely to be a voice of dissention. While hundreds of thousands join the hoards in the market square screaming praise for their latest DIY yet-to-break-bestseller, he is likely to be reminding us that ‘indie’ was a subculture before it became a fashionably acceptable substitute term for Self-Published.

Not because he has no love of the printed word or because he wants to limit anyone’s free expression, but because he passionately advocates the fundamentally interactive nature of storytelling.

The digital revolution is one way in which exclusivity has been eroded in the writing and sharing of stories, but Dan is one of a growing number of artists who are taking their work out of the cold metal box and bringing it live to the stage or the pub or the street.

He is more likely to be stapling poems to lamp posts or hosting a poetry slam than sitting in a dusty book-lined nook creating beautiful prose for the elect. He does do that, though. He has several books you might like to check out, including the one I’m here to talk about today.

Before I get to that, I’d like to mention some other ways he works to bring artists together with their audience. I first discovered him through Year Zero Writers, a collective of superbly skilled writers who share a blog and chat from time to time. That led me to eight cuts, a publisher for independent artists and a gallery showing exhibitions of members’ works, promoting live performances and festivals, and even hosting interactive mixed media arts tours online. When he isn’t doing the moderator thing at those venues, or planning and directing ‘The New Libertines’ [eight cuts gallery’s touring troupe of troubadour tearaways], or blogging and encouraging indie authors to get their hands into the wash of the masses, or working on his newest project, ‘The Cynical Self-publisher’ [Passionate and practical advice on self-publishing for people who care about the content not the sales], he is likely to be writing books and pamphlets.

From the past, there are:
Songs from the Other Side of the Wall
(life:) razorblades included
The Man Who Painted Agnieszka's Shoes
Black Heart High

And today, those titles are joined by Last Man out of Eden.

About Dan Holloway:  2010 will go down as the year I celebrated life by writing about death. I started eight cuts gallery, a place devoted to the richness of words and the beautiful complexities of art and life.

Cody James is the best novelist of her generation. During a very heated debate over her confessional approach to suicide, she wrote “Maybe there is no way to leave the world a better place, and all that remains is to tell the truth.” For me, that sums up why we write, and how we write.

Art and life. We have to ditch that distinction for starters. And live. And live. And going on living and never stop. Because we never know when it’ll end. [Taken from Manifesto]