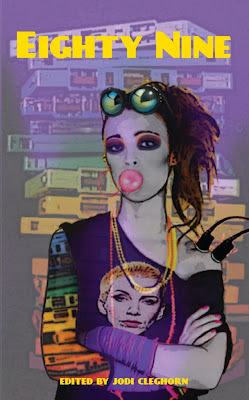 1989: a cusp between decades.
The year the Berlin Wall came down and Voyager went up. Ted Bundy and Emperor Hirohito died. The birth of the first Bush administration and computer virus.
In San Francisco and Newcastle the ground shook, in Chernobyl it melted. Tiananmen Square rocked the world and Tank Man imprinted on the international consciousness. Communism and Thatcherism began their decline, Islamic fundamentalism its rise.

It was the year Batman burst onto the big screen, we went back to the future (again), Indiana Jones made it a trifecta at the box office and Michael Damian told us to rock on.

Based on a play list of 26 songs released in 1989, Eighty Nine re-imagines the social, political, cultural and personal experiences at the end of the decade which gave the world mullets, crimped hair, neon-coloured clothing, acid-wash denim, keytars, the walkman, Live Aid, the first compact disc and MTV.


I was given a copy of Eighty Nine by the editor, Jodi Cleghorn, without any expectation of promotion. When I read the collection, I was so delighted by the consistent quality of the stories, I offered to post reviews.

Anthologies, even from a single author we admire, tend to be a bit up and down depending on our individual tastes. I read the opening stories of Eighty Nine and enjoyed them, then found I was up to the middle of the book and still reading avidly without wanting to pause, not even between stories. There are 26 individual tales here, based, as the blurb reveals, on a playlist of songs from 1989, and I did not rate any one of them less than a high 3 from 5. In those cases where I liked them less, it is definitely a question of taste rather than poor penmanship. Every story brings a different style and a different subject, [all a little bleak, as reflects the mood at the end of the nineteen eighties] so I will share those I enjoyed most.

30 Years in the Bathroom, by Icy Sedgwick– It is 1989 and Diana Phelps, an aging star, stares at her reflection in the bathroom mirror. Her age is well hidden, but she made her film debut thirty years earlier and now not even her beauty is sufficient to bring her the work she loves or the adoration she craves. Reduced to begging, she pleads for Aphrodite to renew her charms, but the gods are as fickle as fame
itself.  (5)

Nowhere Land, by Maria Kelly– The residents of Area Zero watch as a new inmate is discharged from The Bullet. It’s a door, the only link they have with the real world, and they hope endlessly for a newcomer with a textbook that will help them understand where they are. They are dissidents: names and faces who simply disappeared, and they live in barracks to defend themselves from the monsters that inhabit this nowhere land. If only they could find a way back…. (5)

Chronical Child, by Lily Mulholland– At the Imperial mausoleum in Hachioji, Kiko-chan remembers her life as the Emperor Hirohito’s beloved concubine. She combs her hair, tugging free memories of her love and the warnings she offered in the hope he would choose love over duty.  (5)

Amir, by Benjamin Solah- One of the stories that made me weep, as it brings the image of the lone, unarmed student in Tiananmen Square and the horror that image represented into every other field of war. Amir is the story of solidarity, a word du jour for 1989, when artists and students stood up to tanks. (5)

The Banging on the Door, by Jonathan Crossfield– As the tide of political power swings in East Berlin, a Stasi informer flees from the neighbours he once monitored. Alone in the dark forest, in a hovel that offers scant protection from the elements, he meets with the spirit of another who has been hounded from safety by a witch-hunt. There, he learns to fear what his neighbours once feared most: the banging on the door. (5)

Cocaine, My Sweetheart, by Jodi Cleghorn– And as a last recommendation, a nod to the editor herself. In a slightly different tribute to 1989, this story leaves behind the political turmoil and moves closer to more personal tragedies. Cocaine, the mistress of choice for the 1980s.  A sequence of memories that leaps from one reality to another carries Rebecca and Toby back into the arms of their sweetheart. (5)

Literary Mix Tapes is the creative brainchild of eMergent Publishing’s co-founder Jodi Cleghorn, inspired by the practice of recording mix tapes on a double tape deck as a teenager in the 80′s and early 90′s.
The anthologies are a cross pollination of music and writing, and have roots in Cleghorn’s search for new ways to inspire fiction and encourage writers to work together. Built on a ‘collective submissions platform’ and tapping into the crowd-sourcing potential of social media and networking, the anthologies reflect eMergent Publishing’s determination to push the boundaries of the anthology and collaborative work, and to bring the freshest stories and newest authors to lovers of speculative short fiction.

Bio - editor and creative director:
Jodi Cleghorn is the Creative Director at eMergent Publishing and Managing Editor of the Chinese Whisperings and Literary Mix Tapes imprints. Passionate about short stories and a mad innovator of new anthology and collaborative models, Jodi creates publishing opportunities for emerging writers and is working to revive the close and supportive relationship editors and authors once thrived in. In her spare time she chases her own characters across an often dark narrative landscape.
EMAIL: jodi.cleghorn@emergent-publishing.com

Anthologies in the series, available at the eMP bookstore.
Nothing But Flowers
Eighty Nine
Deck the Halls
Tiny Dancer

Three anthologies are slated for release in 2013 based on the music and events of 1968, and the songs Hotel California and Sympathy for the Devil.
Email ThisBlogThis!Share to TwitterShare to FacebookShare to Pinterest