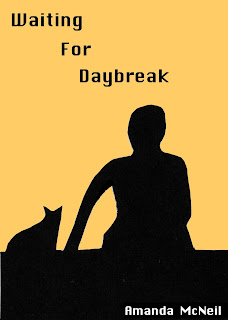 Frieda has never felt normal. She feels every emotion too strongly and lashes out at herself in punishment. But one day when she stays home from work too depressed to get out of bed, a virus breaks out turning her neighbors into flesh-eating, brain-hungry zombies. As her survival instinct kicks in keeping her safe from the zombies, Frieda can’t help but wonder if she now counts as healthy and normal, or is she still abnormal compared to every other human being who is craving brains?

This book was requested for review. I am a long time follower of Amanda's reviews.

Since I read 'Waiting for Daybreak', Amanda has begun her promotional blog tour and she has had a chance to express her intention in writing this story more clearly than in a 200 word blurb. That is a very good thing. I hope that readers like myself who have followed her reviews will have followed the blog tour and gained a feel for her book's strengths, and so will not be holding expectations of the book which it was not intended to meet.


If I had begun reading knowing what to expect, a YA story of emotional development, I would have given grace to the author and trusted her to introduce me to Frieda and her innermost fears. Instead, I began reading a post-apocalyptic science fiction zombie story, well written but with some flaws. That made me wary, and I questioned, then, what Frieda was revealing to me.

I wavered for a long time over a rating for Waiting for Daybreak. I couldn’t decide between a three – ‘this is an okay read, but….’ and a four – ‘this was a good book; it ticked most of the boxes; go ahead and read it.’


I settled on the four stars so I should start with what I loved about it.

This is not a long book and it moves along at a clip. The story flies by and it is thoroughly engrossing, with periods of action and adrenaline nicely balanced by periods of memory and self-reflection. The sense of danger and suspense is well developed, and the narrator’s doubts and fears are easily understood. It is not hard to empathize with the characters in this book.

The main character, Frieda, has a dissociative mental illness. She is socially inept and has a history of deep depression, substance abuse, and self-harm. Her journey toward daybreak is compelling and well told. As a book about Frieda, it is well worthy of its four stars.

To begin with the coloquialism of the grammar and syntax grated every now and then. As I read on, however, I decided that as a first-person present-tense narrative, I was reading the words of the character and not the author, so that minus moved closer to a plus.

Secondly, as with most addictions, self-mutilation acts a dampener to emotional development, which explains the immaturity of Frieda’s actions and reactions. Her flawed decision making processes would then also have been deliberately plotted by the author. But it was difficult at first to know if they were intentional or if Frieda was an awkward characterization, acting as the author believes any reader in the same position might act. In the end I decided it didn’t matter; she is as she is and she acts as she does. As a vessel for sharing understanding of mental illness, she is better than many. Again, as I continued reading I became more aware and more convinced of the fact that I was following Frieda's inner story more than an apocalyptic story.

Ultimately, these issues only arose because I struggled with the genre tags. With the freedom of self-publication, genre definitions are being blurred and discarded. That is fine, but it can make it hard for readers to connect to the stories they enjoy and for authors to direct their work toward its ideal market. By its nature this book is going to appeal to readers of two distinct types, and I am not certain either of them will find what they want unless the reader understands exactly what it is about.

It is framed, primarily, as a post-apocalypse zombie survival story. As such it does not work very well; it is two dimensional. The opening scenes are straight out of ‘I Am Legend’, the remainder from ‘Shaun of the Dead’, with the splatter/melodrama/comedy intact. I apologize if that sounds harsh, but there is no nuance at all in this zombocalypse. It does not seem well thought out in regard to Frieda’s methods of survival, or the series of events that establish the story in its place. I need not go into detail about the sole surviving pet which is inexplicably left to wander the streets, or securing food and water supplies, or the choice of safe living quarters, or the changing circumstance of likely zombie attack, etc. True devotees of zombie tales are likely to shred these elements.

The second group of readers, however, those who enjoy a sympathetic journey through the worst experiences of young adult angst, will find a gem. It is a story which asks the reader to question what is normal, as Frieda is forced to examine her darkest demons - those inside her head not those outside. I am not entirely sure they will find it, hidden as it is in its zombie-colored camouflage. The zombie apocalypse is no more than a crisis event on which to hang the threads of a deeper emotional story, and that is not made plain in the introductory blurb.

In summary, properly marketed so that it finds its way to its best readership, this book is deserving of four stars. If it is picked up by zombie aficionados, it will suffer. I hope the author reaches her intended market. Its tags at Amazon clearly show a primary reference to the lesser zombie/horror without mention of the superior emotional interior landscape. [zombies, horror fiction, dead series, post-apocalyptic, zombie apocalypse, etc] Its tags need boosting toward soul-searching, mental illness, and personal development.

About Amanda McNeil: I’m a 20-something, unmarried, child-free Bostonian!  I love animals, actively advocate for animal rights, and have been a vegetarian since January 1, 2007.  I consider myself to be an agnostic humanist, although a friend jokingly said I’m more like a hedonist humanist. As for my credentials, I received my BA from Brandeis University in History (concentration on US History) and English and American Literature with a minor in Religious Studies.  I graduated in January of 2011 with my MLIS from Simmons College.


I believe that people with mental illnesses should be loved and helped, not stigmatized or demonized.  Due to my passion for those struggling with mental illnesses and their loved ones, I created the Mental Illness Advocacy (MIA) Reading Challenge.  Please do take a moment to check out the dedicated page and consider broadening your reading horizons!

Author's website.
Contact: opinionsofawolf[at]gmail[dot]com
Other works:
The Most Lovely Morning Short story in Down in the Dirt
The Tale of Leroy of the Backwoods of Vermont Short story in 69 Flavors of Paranoia
Ecstatic Evil  paranormal romance novella