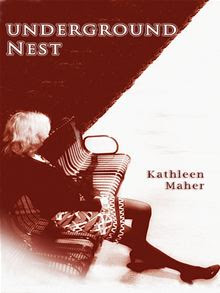 When Zachary Severins, dedicated Scoutmaster and community leader, is caught cheating on his wife, she divorces him, his children lose respect for him, and his mistress spurns him. As Zach's personal life crumbles, his professional career begins to follow. Only after Zach loses everything does he start to learn the true meaning of friendship, love, and responsibility.

Underground Nest, a short novel, is contemporary fiction with a sharp sense of humor but a soft heart for its characters.

I read this story first as a web serial when it was posted, and was really pleased to get hold of the book when it became available. Underground Nest, as the title might suggest, is not a story about happy families and white picket fences. It is about a man driven to accumulate an ideal wife, the ideal family, the ideal career, and the ideal lifestyle. Zach Severins knows how everything should look. He has the veneer so perfectly constructed that he has convinced even himself that it is all real.

From childhood Zach pursued this ideal, collecting each piece of his life like so many Scout badges. Scouting and the high standards it demands are central to his image. He was the youngest scout to attain his Eagle Scout award, and after holding it without blemish for 25 years, he was entitled to the highest accolade of all: the Distinguished Eagle Scout Award. He had his perfect wife, family, home, career and recognition. He even had a slew of meaningless secret affairs to add some spice to life. Zack was a man poised to own the world. And then a crack appeared.

Zach is not an easy man to like, but he is easy enough to understand. The plotting of his rise is all quite straightforward, and is detailed in the first third of the book. He is not unusual in his drive to succeed; we have all known and worked with people like Zach. He is not a bad man, and Kathleen Maher paints him with a sympathetic hand. She understands her character well, and his inevitable downfall and struggle to rebuild his life makes engrossing reading.

Zach’s wife, Beth, plays the perfect host for her husband’s deceptions and self-deceptions. She is not a weak woman, but is certainly the product of her world. She is a devoted mother and supportive and understanding wife. She has her friends and hobbies and her own special little artistic outlet: her pottery. She genuinely does love her husband, even when she hates him to the marrow of her bones. She is programmed by her own upbringing to need him, and to be essential to him: which makes sex an oddly fraught subject for her. The once safe marriage bed becomes an arena for love and hate and anger and the wielding of power.

His children, raised in sweetly oblivious luxury, are caught off guard; not by the reality of their father’s double life, but by the sudden realization that it is their mother who has created for them the image of their father as a loving and devoted man. They are teens when the ruse is up, and the backlash is immediate and cruel.

Zach’s friendships are mostly shams. When he finds himself unkempt, unwashed and homeless in his office, the only person who shows anything approaching kindness and friendship is a fellow professor who Zach has always studiously avoided.

And the glittering gem that smashes into Zach’s world and begins the demolition, Vida, is everything that Zach did not know he wanted. Vida is part of another world: bigger, brighter, and even more distinguished than the one he had thought perfect. But Vida is not Beth. And Zach cannot control and manipulate her as he does every other aspect of his life.

Underground Nest is a short read. It moves along very quickly, the writing style is both conversational and melodic. Watching everything Zach has built fall down is as fascinating as any car crash, and his efforts to rebuild and the lessons he must learn to begin that journey equally so.

This is not an easy book to categorize in genre. It is, as I have detailed, the study of a man’s fall and attempts to rise. It examines the inner turmoil exposed when the outer shell of a life is destroyed. It examines Zach’s lies, told to himself and to others. There is no action adventure, no mystery to solve, no seething romance to burn up pages. But it is a totally engrossing read.

I thoroughly enjoyed it and recommend it for readers who like to consider the charades we all, to a greater or lesser degree, enact as we make ourselves fit into the world as we know it.

About Kathleen Maher:  I write more than I sleep.


I reside in New York City but live mostly in my head, which can be a problem on the subway.

Some years ago I began posting my work-in-progress on a blog as a way to keep myself from rewriting stories to death. Now I have enough material for several books and must start re-writing, but you can still visit Diary of a Heretic, where you'll find episodes of "James Bond and the Girls of Woodstock," as well as assorted short fiction and various ephemera.

Leave a message! I love to hear from readers.