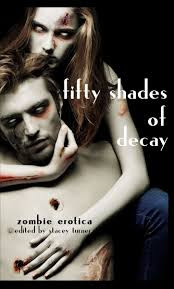 What's sexy about zombies? 51 authors answered that question with wild, weird, and titillating tales. From love during the apocalypse, to love that goes beyond the grave and back again, to love that well, never dies, you'll find these pages filled with desires demanding to be fufilled, hungers to be slaked, and lovers who won't let a little thing like death (or undeath) come between them. Do zombies need sex as much as they need brains? What would you do to bring a lover back from the dead? What if you survived the apocalypse only to find yourself alone and sexually frustrated?

Light some candles, put on some mood music, and cozy up with Fifty Shades of Decay. The zombie sexpocalypse has begun...

Adult-content rating: This book contains content considered unsuitable for young readers 17 and under, and which may be offensive to some readers of all ages.

Well, there’s something for all those readers in this book.

But no horror, really, unless you are a true dyed in the wool/ the mention of zombies makes you cover your eyes/easily scared witless zombiephobe, there is no true horror in this collection. None of the stories build any sense of dread, or concentrate on the fear, relentless pursuit, and desperation of a true zombie horror.

So what do you get? This work collects writers of various styles and to some degree, quality. It is hard to put erotica into a grab bag, too. What one person finds hot and juicy, another finds gross or underwhelming. The same applies to comedy and humour. So, I’ll present here what I think are the standout offerings, some for their quality of storytelling, some for the laugh, some for the erotica, and some for the gross-out.

CARNAGE KANDY  - Teresa Hawk.  This story starts at full gallop and just keeps running. It is a fun romp through an easily recognized zombocalypse. Lotta Carnage and Kandy Cakes, have been freed from the constraints of society’s mores. In fact:

“They believed Armageddon was the best thing to ever happen to the shitbag world. The End meant true freedom. They took anything, went anywhere, and did whatever they wanted. Carnage found her pillaging partner stranded in Utah last summer. Since then, Kandy Cakes evolved from a prude hyper-Christian, Martha Stewart wannabe into a punk-bitch, warrior, sex kitten. They were a tribe of two. Kandy felt safer killing hordes of infected biters with Carnage than she had when living in the suburbs with her husband back before the pandemic. The old world seemed so far away, and her memories like watching black and white musicals with the volume muted.”

“Ash felt a sick cold in the pit of her stomach. If he had been in better shape, Jackson would’ve guessed something was wrong, but he was still weak and disoriented from blood loss and pain. Ash finished cleaning the wound, packed it with gauze, and wrapped an elastic bandage tight around to keep it in place.
“How bad?” he asked. Always practical.
Her heart felt as though it were wrapped in iron bands. “You’ll live. Now rest.”
Ash pushed Jackson toward the bedroom they shared, where they held each other against the
dark and the loneliness and the memories and the dead.”

The shuffling dead don’t make an appearance in this one; their work has already been done. What follows is the sadness of a woman who, having found great love in the midst of loss and horror, can now only hold the man she loves until he, too, is gone.

S. P. Q. R. - Rob M. Miller & Jill S. Behe.  Here is a completely different take on the theme. Set in a new Roman/British Empire, the reader is so deeply and immediately immersed in the world that I thought it might be an alternative reality rather than post apocalypse. One beautiful flash of comforting memory in the face of death brings all the threads of possibility together, however, and moves us into the zombie apocalypse future.

“She muttered something and handed over the binoculars.
‘What was that, Cesarina?’ Bringing up the device, the Steiner 10x50 gave a perfect view of the day-long slaughter, the ranks of bruisers and mounted furies in mop-up mode, their armor and clear, polycarbonate shields now black with caked and dripping viscera, the herd of some thousands of Zulus fallen before the Legion’s disciplined meat grinder. All praise to pipe, sword, and gun.
‘I said: Senātus Populusque Rōmānus. The Senate and People of Rome.’”

I admit to having to read this twice before I had everything straight in my head, but the time was well worth it. This story is a gem; the sort of thing you wish was novel length.

MÉNAGE À TRAUMA - Dan Larnerd.  This was a laugh from beginning to end. And a stern warning to ‘trendy young people who wear designer scarves and skinny jeans’ not to venture into two star motels with gob-eyed clerks,  where ‘all sorts of hippy dippy types got the entire top floor rented out’ for séances.

In bad hotels, more is left behind of past occupants than just their dust and DNA. It pays to look under the bed!

2 IS FOR TABOO - Craig Faustus Buck.  Again, chosen for taking a slightly different approach to the theme. This looks past the apocalypse to a time when the undead and the living co-exist in a structured caste society. Sex between the living and the dead is illegal [to protect the breakable organs of the dead] and the thought of the forbidden can be a turn-on. Especially for couples who meet at Sexaholics Anonymous.

MEAT - Tim Marquitz.  The idea of having sexual access to a person who would otherwise be out of your league drives many of these stories. One of the best realized of them is Meat. A plain and painfully shy girl who has lusted quietly after a male stripper can now pay for his sexual services, post apocalypse. As is common in this scenario, he is bound and gagged and she has the thrill of power added to the dangerous possibility of his escape.

LOVE IN A LAUNDROMAT - Megan Dorei.  Romance readers and those who want some romantic friction in their zombie love stories will love this one. It is perfectly paced to fit the Mills & Boon template.

GLORY - Jay Wilburn.  This last of the 5 star detailed examinations is the only story I found really dark and disturbing. This is closest to torture porn, but in fairness, it is too short to cross the line, and while some scenes are graphic, it does not dwell too intensely on the suffering. It does look at what happens to the worst of the worst when society breaks down. Here, a demented defrocked priest punishes others for his own sins – maybe not too far from reality, there. Well written and well constructed, this story was a bit like a car crash for me: I wanted to look away, but just kept reading. Luckily the ending is good reason to follow through.

DEAD THINGS DON’T RISE - Mandy DeGeit   The next two stories I’ve chosen to highlight are for the people who just want a laugh at the grossness of zombie loving. Nothing nasty here, nothing disturbing, apart from some dodgy body fluids. These stories are about making the best of a bad situation. In DEAD THINGS DON’T RISE, David is drunk, soaked in his own vomit, and struggling to make it down the street to his house – who is he to judge the chick in the cemetery who seems to be a little less than fastidious with her personal hygiene? Sex is sex; get it while you can.

SOMETHING BORROWED - Nicky Peacock.  And here we have a bride, determined not to let the unfolding zombie apocalypse ruin her big day – or her wedding night, for that matter. When she finds her husband at the altar, with parts of him ‘spread across the floor like red butter’, she puts on [takes off?] her big girl panties and finds a solution to the loss. You know, old, new, borrowed, blue….

LOVE REVIVED  - Carrie-Lea Cote:  Zombies here, and this is the only voodoo!

SOME LIKE IT ROT  - John Palisano:  Party drugs and moronic starlets. The zombocalypse might have already happened!

OUT WITH A BANG  - Laura J. Hickman:  Some nice motivation for this character; she’s a bit more than just a Jane Doe dealing with the end of the world.

ADAM & EVE AT THE END OF DAYS - Mike D. McCarty:   Even the competent and well-armed can find themselves with the odds of survival stacked against them. When they do, they have to find a way to pass the time they have left.

RAVING DISEASED  - Brett Williams:   Another risk arises for the rave crowd. I liked this for its really tightly clipped storytelling - a nice clean way to say a lot in few words.

HER PERFECT LOVER  - C. W. LaSart:  One of a number of stories where mortuary workers find the zombie outbreak to their taste. This one has some novel ideas about how to keep your lover fresh.

THE Z-SPOT  - Benjamin Kane Ethridge: One of the many zombie stripper/prostitute workings of the theme, this story stood out for the gross factor squeezed into what I thought would be a love story.

In the many stories that remain there are quite a few well worth the purchase price, there are simply too many in this collection to deal with individually. All ratings are subjective, so readers may like some I’ve left out better than those I’ve chosen to highlight with four and five star ratings.

All up, I am happy with the selection the publishers have chosen here. My only advice to anyone who would consider reading this book is to spread out the reading over a few sessions. The blood and gore can get a bit mind-numbing taken in too-large doses.

Angelic Knight Press is the brainchild of Blaze McRob and Quinn Cullen. Both are authors who were looking for an acceptable alternative to traditional publishers and self-publishing. What better way than to create your own publishing company? And so Angelic Knight Press was born.
Email ThisBlogThis!Share to TwitterShare to FacebookShare to Pinterest