MISSPELLED PARADISE: A Year in a Reinvented Colombia - BRYANNA PLOG 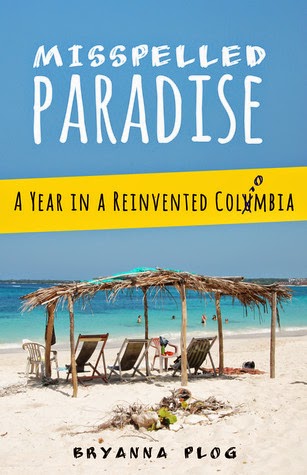 If you’re looking for a book about Colombia that involves harrowing escapes from FARC guerrillas or tales of drug smuggling… this is not it. In­stead, MISSPELLED PARADISE gives an honest and light­hearted look at the history, culture, and diversity of a country that may be struggling with poverty and a civil conflict, but celebrates its joy with blasting street parties named after the stacks of amplifiers, tiny watery beers, and a never-ending parade of beauty contestants.

As a volunteer middle school English teacher in an impoverished Colombian Caribbean community, Bryanna Plog recounts with dry humor her year traveling Colombia’s cities, deserts, and rainforests (fairly successful ventures), her attempts to hold class on a regular schedule (less successful), and her quest to eat meals that didn’t include rice (a complete and utter failure).

From the high rises of Bogotá, to the small island town of Santa Ana, from the deserts of the Guajira peninsula and the northern-most part of South America, to the jungles of the Amazon rainforest far south, learn, be surprised, and laugh out loud as you journey through a reinvented Colombia.

Misspelled Paradise is a thoroughly enjoyable read.  If I was a traveller intent on visiting Colombia, I would consider it a must-read.

There are a couple of points that made this a stand-out for me.

First is the fact that it is not a simple travel guide. The author lived in rural Colombia for a year, and while she took the opportunity to visit and describe some of the better known destinations, she also spent considerable time in the out-of-the-way places. Judging by the reaction of the locals, not very many tourists make the effort:

“We walked around, creating a small sensation. Santaneros had gotten used to us and we were always greeted by students, parents, and shopkeepers as we went through Santa Ana’s streets. Here in Barú, reactions was a mixture of unabashed stares (“Dios mío, there are white people in Barú!”), many looks of confusion (“Wow, these tourists are really lost if they were looking for Playa Blanca”), and a few sales pitches for tourist trinkets (“Amigas, we have beautiful towels for the beach”).”

Also, Bryanna Plog has a delightfully understated wit, and faces many of the less agreeable aspects of moving off the tourist tracks with good humour and, eventually, affection. The endless heat, the less than reliable services like water and electricity, the laid back attitude to scheduling, interminable school anthem/national anthem/local anthem singing, local food, drink, livestock, bugs, travel, history and customs are all clearly characterized as the reader experiences each with her on her journey.

There is also the sense of her frustration as the job she went to do, to teach English, is made near to impossible by a school system flawed and barely functioning. Against this is a genuine affection for her students and the people of Santa Ana, with their stoic acceptance of difficulty and exuberant expressions of joy.

Misspelled Paradise is a well-written and uncomplicated read, and one which zips by easily. I read it in two sittings. I am not a traveller and am not usually a reader of travel memoirs, so the one fault I found is probably irrelevant to those who are. Once put down, there is no page-turning narrative to drive you back to it. It is an enjoyable way to learn about Colombia -- and, no less importantly, the realities of volunteer work – and so best recommended for those who want to travel there, or to volunteer anywhere.

In 2011, author Bryanna Plog spent a year in Colombia as a volunteer English teacher through Harvard-based WorldTeach and Colombia-based Volunteers Colombia. She returned to Colombia in 2013 for two weeks to visit old friends and new places. Bryanna has traveled to or lived on six continents (including Antarctica: Asia is still on the list). Originally from western Washington, she is currently an educator and park ranger with the National Park Service. She continues to write and blog about traveling, Colombia, and other favorite destinations at bryannaplog.com.