A TRIBUTE TO THE MOTHER OF THE WATERS - JC & MARIA MILLER 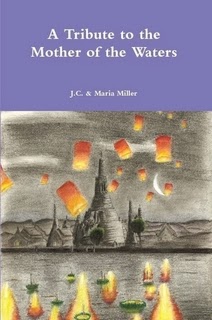 Anthony and Greg, two U.S. soldiers during the Vietnam War, find themselves stationed in Bangkok, Thailand. Chailai and Pensri struggle to survive in a city full of predators. When their worlds collide, the foursome form a family, only to be threatened by the work the young men must perform for the U.S. Army.


From the time of the Vietnam War (Second Indochina War), some might say from before it officially began, conflicting theories on its causes and the intent of its instigators have arisen. This book follows four people caught up in the storm of the war without offering any particular explanation for the situations they find themselves in. The reader is left to draw their own conclusions.


Set in Bangkok, not the steamy jungles most often seen in stories of this conflict, ‘A Tribute to the Mother of the Waters’ draws the reader into the lives of its players. Written in short chapters, each viewing the ongoing events through the eyes of a different character, we come face-to-face with the joys and fears of each individual as they feel their way through an unfriendly world and try to make the best of their lives.


Chailai is a fourteen-year-old Thai girl whose rural home is destroyed by a tsunami, and her family, lost. Hoping to to use her grasp of English to find a good job in the capital, she sets off with the disaster relief trucks for Bangkok. There she finds herself homeless and lost on dangerous streets. And she is not the only child to face these dangers. As she struggles to find a safe place to sleep, food, and any kind of work, she meets an eight-year-old girl, Pensri, who survives alone by stealing. In the dark void of her grief, Chailai takes the little street waif into her heart and vows to care for her and keep her safe.


It isn’t long before Chailai’s naivety is exploited and she is forced to face a grim reality. The only way she and Pensri will eat is if she becomes a prostitute. For a year or so it is the only way they can live, the only way Chailai can keep Pensri from the streets where dangerous men snatch unguarded children to sell on the international slave market.


Anthony and Greg are two absolutely Joe-Ordinary boys drafted to the Vietnam conflict. Anthony is intelligent and open to the world and its experiences; Gregory is street-smart and only in the army because he is loose and directionless, waiting for life to begin. During their induction, the army brass recognise in them characteristics they value and set the two aside for special training and special duties. Both boys are pleased and relieved to find they will be stationed in a Bangkok hotel, well away from the bloody front-lines, where they can wait and practise not asking questions.


There they meet Chailai and Pensri. Anthony is irresistibly drawn to the English speaking beauty, quickly conscripting her to be his guide around Bangkok. He fills the days while he waits for orders visiting the markets and temples, spending his pay on wonderful Thai food and pretty clothes to replace Chailai’s rags. For months he tells himself she is just like his little sister, but as time goes on he realises he has grown to love her deeply, and fears for her and her future begin to crowd into his mind.


The authors draw comparisons to William Faulkner’s ‘As I Lay Dying’, in that ‘A Tribute to the Mother of the Waters’ is not a linear narrative but a sequence of first person perspectives on the unfolding storyline. Readers who dislike Faulkner should not be concerned, however, that this book is dense or confusing. It is deceptively simply written, and in the carefully worded voice of each character the reader finds themselves fearing for the little girls as they face this awful world alone, or sitting quietly in a Bangkok bar with Greg, recognizing the thugs and drug dealers who inhabit a shadowy underworld.


Along with Anthony, the reader feels an affection for Chailai growing, and his confusion as the assignments they are given seem to be at odds with everything they understand about their country’s obligations in this war. And we share his fear as the realization grows that he and Gregory are in real danger, and that the girls, who have become his own small surrogate family, rely entirely on him for their safety.


When circumstances change and the knots of uncertainty tighten around the boys, we feel their terror intimately, and know there are no safe choices left.


The authors do not shrink away from the stark realities of the world they describe. There is no gratuitous sex or violence, but the Bangkok streets are not dressed up for tourists. If you squik at child-prostitution or the sudden violence of organized crime, this is perhaps not the book for you. For anyone who wants a moving, first-person view of an ancient culture in a turbulent and dangerous time, something a bit different, this is one for you.


I have given ‘A Tribute to the Mother of the Waters’ four stars, a strong recommendation.

"While studying English at Xavier University, I discovered what literature was all about. It was more than just a good story; it was a story that made you feel emotionally attached to the characters for days, weeks, or even years. That's what I strove for in my stories: strong characters who make an impact. I enjoy writing about real people and real places, as well as real events that somehow escaped the attention of the history books. I enjoy telling vibrant stories that make you laugh and cry, but mostly that make you feel like you're really there right next to the character."