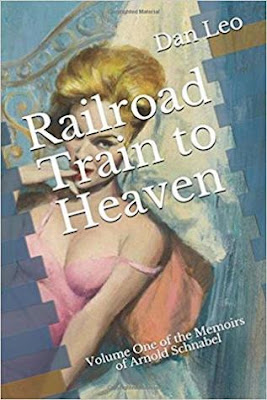 The author, Dan Leo, tells us all we need to know about what this book is:

"Part one of the memoirs of Arnold Schnabel, a railroad brakeman and part-time poet recovering from a mental collapse in the summer of 1963 in the guest house of his three maiden aunts in the New Jersey seashore town of Cape May.

Arnold falls in love with a beautiful bohemian girl called Elektra, has many meetings with a chain-smoking Jesus, fights off the advances of a mad lady novelist, travels back and forth in time, and to heaven and back, and ever onward."

Who can say whether 'Railroad Train to Heaven: Volume One of the Memoirs of Arnold Schnabel' involves mental illness, magical realism, chemical enhancement, or space aliens? Is it only an occasional shift in the space-time continuum or does Arnold slip unintentionally between chinks in the multiverse? All of the above? I don’t know. Truly, who can say?

In this minute dissection of Arnold’s life, or that previously mentioned summer of 1963 in Cape May, we meet one of the world’s least egotistical, most likeable characters. Arnold is unrelentingly pleasant. You will want to travel with him, and once his adventures begin, they leave the station and do not pause. The pages slip by effortlessly, like views of pastoral elegance through the glass; the story carries the reader along with the sure, sound rhythm of the tracks, in and out of love and sex, drugs and music, religion and clarity. I hesitate to draw a comparison to Garrison Keiller’s ‘Prairie Home Companion’, but they are not a million miles apart in style.

Mr Leo’s familiarity with great literature and his love of dime store noir both shine in the clear narrative voice. His intimate knowledge of the time and place offer expansive views of the real seaside town of Cape May, beside finely detailed images that snap into sharp focus.

I began reading Railroad Train to Heaven as a webserial some years ago. I’ve got to say, while I was delighted with the story and the author’s crafty use of ironic statement, some reviewers then were prone to snort at comments about Arnold’s genius and the scope of ‘the work’, his memoir. They seem to have taken the unreliable narrator seriously and thereby completely missed the point. The hopes for Arnold’s unpublished volumes of poems and the gouts of praise from fictitious editors of weekly small-presses are hilarious.

Relax and enjoy, readers. Just step onto the train with Arnold and let him take you gently from behind. Laugh with him – at him, if you like – as the world confuses and delights this innocent abroad. Don’t take it too seriously, and get the message from the start – to quote a famous Australian comedian, Graham Kennedy -- “IT’S A JOKE, JOYCE!”

Dan Leo is a native of Philly, who spent his childhood summers at the house of his aunts in Cape May, New Jersey. Reading the sidebars of his blogs will give you a laugh and some insight into the kind of humour to expect in his novels. As editor of  “Boswell’s Life of Johnson”, we find him as “Dan Leo, Assistant Professor of 18th Century British Intellectual Conversational Studies, Olney Community College; author of "Bozzie and Dr. Sam: The Condemned Man’s Conversion", the Olney Community College Press.” lol

His image is variously stars of the silver screen, or perhaps one of the Cray twins, although I know him best as Warner Baxter, the suave, womanizing, charismatic Latin-bandit-type in antique films.
You can follow him at Goodreads and Facebook, on his blogsite or Amazon.

He is, by his own admission:
Gender     Male
Industry     Architecture
Occupation     Waste management
Introduction     At play in the fields of the Lord of the Dance.
Interests     Sleeping.
Favorite Movies:    "Two For Tortuga", "Stopover in Singapore", "Sunset Over Olney", "The McGurks of 65th Avenue", "Bayonets of Blood", "Private Proust", "The East Oak Lane Boys".
Favorite Music:    Gabby & the Gazelles, The Rear Ends, Patrick Keith and Eddy, anything by Vinteuil
Favorite Books:     "Young Marcel", "Uncle Buddy's House", "A Town Called Disdain", "Railroad Train to Heaven", "Ye Cannot Quench", "The Brawny Embraces", anything by Henry de Montherlant
Email ThisBlogThis!Share to TwitterShare to FacebookShare to Pinterest