THIS WORLD OR ANY OTHER WORLD - DAN LEO 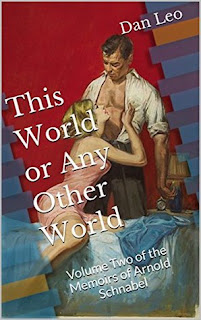 The eagerly-awaited second volume of the memoirs of Arnold Schnabel, 42 years eternal, former railroad brakeman, poet, wit, recovering mental patient, and traveler through space and time. Beginning only a few moments after the ending of the critically acclaimed RAILROAD TRAIN TO HEAVEN (“Like a runaway locomotive, roaring down the track to hell and back!” – Horace P. Sternwall) the present volume transpires entirely on one momentous Saturday night in August of 1963, in the quaint seaside town of Cape May, New Jersey, and features encounters with Frank Sinatra and the Rat Pack; a talking doll named Clarissa; an ancient shopkeeper with the ability to freeze time, named Mr. Arbuthnot; St. Thomas Becket, the demon Belphegor, the angel Gabriel; and the amorous lady novelist Gertrude Evans. Arnold also renews his acquaintance with his friend Jesus, and does battle with none other than the prince of darkness himself, who persistently attempts to drag our hero into the fiery pits of hell, just as Arnold abides bound and determined to live his life to the fullest, in THIS WORLD OR ANY OTHER WORLD.

This World or Any Other World: Volume Two of the Memoirs of Arnold Schnabel by Dan Leo  - and Arnold’s memoir continues, after a brief stop at the station for refreshments and relief. Once again, the author has given us all we need to know about the journey we will take with Arnold in this volume, so relax and enjoy the ride.

This time, in one night, as he tries to get to the warm comfort of his lover’s bed, Arnold meets with demons and historical figures, saints and sinners and dolls who stubbornly stand in his way.

The great strength of the ongoing tale of Arnold’s recovery from his breakdown is in the simplicity of the telling. The engine of Mr Leo’s novel is dialogue, and it is superbly written. His novels become very much like watching a movie or play. And with each character who joins the chat, the reader can consider new depths of philosophy, of history, of religion, of morality, or can delight in the simple humour of Arnold’s gentle reliability, his unwillingness to judge, and his inability to get away from friends and acquaintances who insist he have just one more drink.

I want to call these books of Arnold’s journey works of genius. It is a big ask, I know, but they are deceptively clean and clear, and like clear water, there are depths to the wisdom in Arnold’s kind heart that bear looking into with more than just a smile. But smile anyway. At very least they are, as others have described them, modern day epics. Remember, if it made you stop and gawp, it is probably a JOKE!


Dan Leo is a native of Philly, who spent his childhood summers at the house of his aunts in Cape May, New Jersey. Reading the sidebars of his blogs will give you a laugh and some insight into the kind of humour to expect in his novels. As editor of  “Boswell’s Life of Johnson”, we find him as “Dan Leo, Assistant Professor of 18th Century British Intellectual Conversational Studies, Olney Community College; author of "Bozzie and Dr. Sam: The Condemned Man’s Conversion", the Olney Community College Press.” lol

His image is variously stars of the silver screen, or perhaps one of the Cray twins, although I know him best as Warner Baxter, the suave, womanizing, charismatic Latin-bandit-type in antique films.
You can follow him at Goodreads and Facebook, on his blogsite or Amazon.

He is, by his own admission:
Gender     Male
Industry     Architecture
Occupation     Waste management
Introduction     At play in the fields of the Lord of the Dance.
Interests     Sleeping.
Favorite Movies:    "Two For Tortuga", "Stopover in Singapore", "Sunset Over Olney", "The McGurks of 65th Avenue", "Bayonets of Blood", "Private Proust", "The East Oak Lane Boys".
Favorite Music:    Gabby & the Gazelles, The Rear Ends, Patrick Keith and Eddy, anything by Vinteuil
Favorite Books:     "Young Marcel", "Uncle Buddy's House", "A Town Called Disdain", "Railroad Train to Heaven", "Ye Cannot Quench", "The Brawny Embraces", anything by Henry de Montherlant
Email ThisBlogThis!Share to TwitterShare to FacebookShare to Pinterest