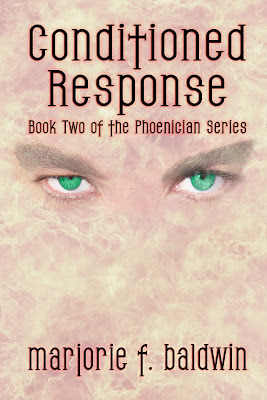 Shayla didn't ask to be a Councillor. As a Phoenician, she shouldn't have to live among the humans, let alone take part in their world. But the Seven Chiefs ordered her to go with Raif, a Proctor from the world Outside. They said they had a Plan. Well, the Seven Chiefs always had a Plan, and Shayla had plans of her own after suffering 13 years as a member of the humans' World Council.

Raif had never intended for things to go this far. A few months, maybe a year, and he could send the little Phoenician girl home again, back where she belonged. She's not a little girl anymore and now he finds himself in competition with his own progenitor for control over his Heir--and future. It's not a Councillor's job to protect a Proctor but that's just what Raif needs right now. Can Shayla save him before he loses his mind completely?

A fast-paced, Classic SciFi that reads more like a mystery with a Romantic SF thread woven in. Set in the far-future on an alien world, humanity's last remnants are trying to save the species from extinction. Huxley-ian eugenics in a Classic Dystopian caste system are artfully blended with an Asimov-ian "machine-turned-man" story by first-time Author Marjorie F. Baldwin.

Conditioned Response was not an easy book to review. As is my practice, once I had my own thoughts and feelings outlined I went back through the reviews others had provided. What I found pinpointed exactly the problem I needed to define in order to explain the difficulty I was having.

Many of the reviewers had loved this book and for good reason. Those who enjoy a detailed social Sci-Fi in the old tradition, where complex societies are presented and peopled by solid, complicated personalities, have found one of the best examples written recently. Conditioned Response is multi-layered, weaving together a number of intriguing social, personal, and political mysteries into a fast paced thriller.

The representation of this future human colony and its imperialistic disdain for the powerful indigenous people rings as true as any page of history. Caste discrimination, human trafficking, genetic regulation, sexual intimidation and violence, power-at-all-cost-manipulation of men and minds – all these things seem to rise from an inevitability we recognize in the societies we share today. And on that base the story, or more rightly stories, are masterfully built.

So, you wonder, if it was all so very good, what caused the difficulty in trying to find a fitting rating for the book. Like those who rated the story much lower, aspects I value very highly in a book were not strong, or were missing entirely.

To begin with, I found the story slow to start. That is necessary to some degree in any very complex world where many characters have to be introduced and understood in context, but I found that I was a third of the way in before things really started to move. We had not travelled further than Shayla’s office or lab, and all that time was spent in dense slabs of repetitive dialogue. That tendency for the characters to launch into paragraph after paragraph of oration was tightened as the book progressed, but I found it tough going for some time. Nothing happened to break the weight of the initial narrative dump.

And the thing which I missed most was a deep emotional connection to any of the characters. These people had suffered and went on to suffer great traumas and violence, and yet, the reader is held at a distance. There is no feeling of experiencing the horror from within, no sharing of the pain with the main characters. No immediacy.

As an example, [difficult to find without some sort of spoiler attached] early in the story we learn that as a very young woman, an alien child alone in a strange human society, Shayla was brutally raped by her fellow Councillor. When the event is first mentioned, Shayla herself dismisses the memory as if it was bad, but not something she chose to dwell on. Shortly after, Raif describes the terrible injuries Shayla had suffered when he first met her. These injuries were the result of the rape, and included a broken pelvis.

Now this is horrendous. This is the rape of a defenseless child, alone and attacked by someone who should have been her protector. And yet the events are narrated as if they are simply part of a distant history; we hear nothing of the anguish. None of the terror or the pain, none of the trauma this woman had survived – which any empathic reader can imagine – is brought forward with force by the author. This kind of distance left me with a coolness toward all of the main characters that I would like to have had heated.

What I deduce from this is that enjoyment depends on the expectation of the reader when they pick up a copy of Conditioned Response to read. Those who want Sci-Fi that does not depend on Michael-Bay-bangs and special-effect diversions will love the dense plotting and careful world-building. Those who want to feel deep connection with the characters themselves, and prefer the romantic/erotic threads of a fantastic storyline are more likely to be disappointed.

All up, I am happy to recommend Conditioned Response, because while allowing for where Marjorie F Baldwin was not strong, what she does do well, she does very well indeed.

About Marjorie F Baldwin: Please call me Friday; I was named after the title character in Robert A. Heinlein's book about 'Artificial People'. I write SciFi, usually Classic, speculative stuff set in a dystopian future. My influences have been Robert A. Heinlein, Lois McMaster Bujold, Isaac Asimov, Aldous Huxley, H.G. Wells, and John Scalzi.
The first full-length novel I ever wrote was Conditioned Response, which is now Book 2 of The Phoenician Series. The series will be at least 3 or 4 books long but I can see myself writing prequels easily enough. I'm releasing Book 2 first because Book 1 hasn't been written yet. The series will ultimately reveal who and what the Phoenicians are and reveal the Plan of the Seven Chiefs, but each book is its own, independent chapter of the Plan.