THE AMERICAN BOOK OF THE DEAD – HENRY BAUM. 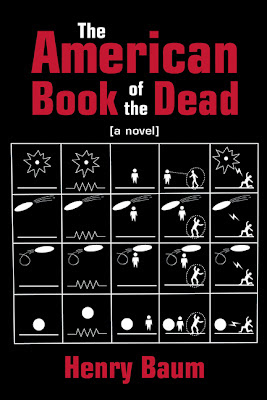 
In the tradition of Philip K. Dick and Robert Anton Wilson,The American Book of the Dead explores the nature of reality and the human race’s potential to either disintegrate or evolve.

The American Book of the Dead is difficult to rate. It is at first a confusing but intriguing proposition, a talented wordsmith setting in place complex ideas with masses of potential. Although the author’s skill with words themselves continues, I do not feel he does full justice to the ideas he begins with.

The initial confusion is short-lived as he sets up an interesting time line, where his aged self considers the writing efforts of his younger self. It does make sense. As a young man, Eugene Myers begins an apocalyptic book which, although he does not remember finishing, begins to unfurl as fact in his middle years.

The year was 2020. Except as I write this the year is 2008. Let’s just say it’s written in hindsight…. So I am sitting at a desk in Los Angeles in 2008, a young man with a new family trying to make ends meet. I am also a man of fifty, a teacher, waiting out the apocalypse. I am also a man of indeterminate age feeling sagely and satisfied. There are three people writing this book at once.

By 2020 the world has become a violent place and Myers’ life is crumbling around him. Through dreams he is led to a group of fellow dreamers. Meanwhile, the Government of the USA has become corrupt and the far right, somehow allied with other world powers, initiates the biblical Armageddon. President Winchell recognizes himself as the Christ, while his father and co conspirators are guardians of the knowledge that aliens are in fact ‘god’. The extermination of billions of people is therefore necessary to reduce the world population to manageable levels for the return of one god or the other. Winchell and Myers, each surrounded by their supporters, finally meet in post war Los Angeles, where the whole truth is finally revealed to all.

Henry Baum presents a story with a multitude of strings: personal loss, religious zealotry, political fundamentalism, conspiracy theories, philosophical and sociological questions, aliens, apocalypse and hope, but he seems to run out of steam. Important details are glossed over. Characters and complex situations are not given a chance to develop.

It’s so difficult to talk about this war without seeming over the top, or implausible—something that was leveled at me for books I’d written in the past. Too heavy-handed, too unsubtle. I can hear the critics now. This scenario is impossible, couldn’t happen. What can I tell you? It’s true and it’s only inevitable if allowed to happen.

This book has been enjoyed by many and is worthy of recommendation in that its flaws are more noticeable in light of what might have been. Comparisons to similar works of epic scale that have gained classic status are inevitable and damaging. For all its sense of bleakness, there is, at least, a note of hope at the end.

About Henry Baum:I’m the author of the novels The Golden Calf, God’s Wife, North of Sunset, and The American Book of the Dead.  I’ve published work with Identity Theory, Storyglossia, Scarecrow, Dogmatika, Purple Prose, 3:AM, Les Episodes, and others. I also write and record music under the name Ash Tree.  Born in New York City, raised in L.A., with stints in many other places, I now live in Los Angeles.