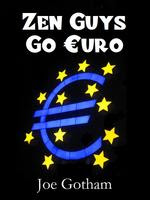 Zen Guys Go Euro is a picaresque adventure about an Irish Sikh and a South African air guitarist on an Interrail trip to stop a madman from killing rap star Mabus on his European Tour. Professor Zumiez believes the rapper is Nostradamus' 'Third Antichrist', after Napoleon and Hitler, and that he must kill him in order to stop the apocalypse. When Jagjeet Singh, a devout Sikh, learns of Zumiez's plan he sets out to prevent the assassination aided by William 'Wizzo' Hapley who really just comes along for the ride. It is a race against time for the 'Zen Guys' to get to Mabus before Zumiez does.

One clear message from Joe Gotham’s writing is there is no race, creed, or culture who can claim any kind of superiority. He finds the average character in every crowd and makes their misguided adventures entertaining.

Zen Guys Go Euro weaves its way through a European travelogue, complete with the history and historic architecture of the great cities. It also recaps some of the major philosophers and prophets of the last three millennia. In fact the story ‘recto’, the pursuit of Mabus by Prof Zumiez, and Jagjeet’s and Wizzo’s attempts to stop him, is wrapped up in the travelogue. The ‘verso’ is the Zen boys doing Europe - Wizzo and Jagjeet’s world trip and the drugs, sex, and strange people they find along the way.

The Zen boys are “Wizzo Hapley: the assficionado, the fool-pitier, the perma-stoned swear-smith”. No one ever called Wizzo smart without adding the word arse. And Jagjeet Singh, genius Irish Sikh who keeps Wizzo pointed in the right direction, drags him from harm’s way as needed, and in between reads the classics.

This is another darkly humourous tale, full of sex, drugs, and rock’n’roll, plus graffiti and air guitar, plus travel. Its only downside might be the ultimate compliment for the author. Reading ZGGE is like being there, sharing the confines of the trains, pubs, and bad motels of the world with Wizzo and Jagjeet. For me personally, I had more than I wanted of Wizzo’s company. Even Jagjeet could get away; the reader goes everywhere with him.

Also by Joe Gotham:
Memento Mori
Come With Your Shades On