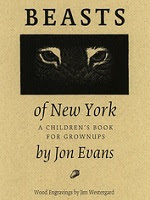 A violent, epic, action-packed urban quest full of very eccentric, often hilarious, extremely dangerous characters who also happen to be animals — the wildlife of New York City, to be exact.

‘Beasts of New York’ is about a squirrel named Patch who must go on an adventure in order to save his home in Central Kingdom.
While the story may be a fable this is a dark novel and not a childrens’ book. You will never look at small "wild" animals the same way.

Many years ago, I read and loved Andre Norton’s Breed to Come and I was immediately reminded of that time when I began reading Beasts of New York. It is no easy task to draw in and compel an adult reader to enter the world of an anthropomorphic hero, but Jon Evans does so effortlessly.

From the opening paragraphs, the text is so clear and unobtrusive that the reader beings a journey with Patch and his companions, following along, and time and chapters are consumed without notice. I read the ‘browse online’ option initially, wanting to do just that, but found I had read a good portion of the story straight through without pause.

Termed a children’s book for grownups, I would have no qualms about allowing a child old enough to read the story to do so. There is some violence and wonderful suspense in this action packed story, but in the light of widely available children’s entertainment, I did not find it overtly frightening or bloody. It did however, have enough substance to warrant its claim to an adult readership willing to accept the premise and characters. Personally, I found it a nice change from the popular masses of were-creatures and changelings; a squirrel, although narrator, remains a squirrel.

The world that the ordinary beasts of New York inhabit is changing rapidly into a frightening and unpredictable warzone, where species who would not normally cohabit must band together to survive. Each of the groups of animals has its standout characters, which develop as distinctive personalities displaying the characteristics of their breed. The story is underpinned by Patch’s quest to find food, save his mother, and end the war.

Overall, I recommend Beasts of New York to animal fantasy lovers young and old. It is well written and the story is fast paced and engrossing.

About Jon Evans: I always wanted to be a writer. I travel a lot - more than 60 countries across six continents, to date. My novel Dark Places won Canada's Arthur Ellis Award and has been translated into Dutch, German, and Japanese. My latest is the Vertigo Crime graphic novel The Executor. I write novels, scripts, magazine journalism, and software. (If you're a traveler and you have an iPhone or an Android phone, check out my free app iTravelFree.) It is fair to say that I am easily bored.