IN HER NAME: EMPIRE - MICHAEL HICKS 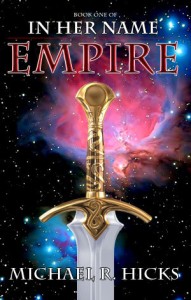 Reza Gard is a young boy of the Human Confederation swept up in the century-long war with the alien Kreelan Empire. Nightmarish female warriors with blue skin, fangs, and razor sharp talons, the Kreelans have technology that is millennia beyond that of the Confederation, yet they seek out close combat with sword and claw, fighting and dying to honor their god-like Empress. Captured and enslaved, Reza must live like his enemies in an experiment to see if humans have souls, and if one may be the key to unlocking an age old curse upon the Kreelan race.

I need another star. Everything needed in a gripping novel is here in In Her Name: Empire, and I hope in its sequels. The storyline is complex without being convoluted. The characters are beautifully drawn and it is easy to become emotionally invested in their progress. The settings are clear without the need for excessive description, and the world building is masterful.

There is nothing monumentally new in ‘In Her Name: Empire’, but neither is it a rehash of the same old, same old. Because Michael Hicks has done such a wonderful job of raising his characters out of the landscape, and placing them in a richly developed social and religious culture, it is a pleasure to go on this journey with him.

It is difficult to categorize this book in any one genre. Sci-Fi is too cold for this story, which does not dwell intensely on the science of the worlds or on their technology. Fantasy is too ethereal to fit well, as with the exception of their religious beliefs and practices, there is no magic involved. And Space-opera, which might be closest to a good fit, is a little too simplistic.

A thoroughly enjoyable read from page one to the end. There is action, suspense, violence and romance all tied together beautifully. I look forward to reading the next books in the series.

About Michael Hicks: Call me Mike. I first put pen to paper when I was a senior. Poor penmanship aside, I kept dabbling, and eventually one of the stories I sketched out turned into the draft of the first three novels of the 'In Her Name' series – Empire, Confederation, and Final Battle – which I drafted between 1991 and 1994. At that time it was actually a single tome, now sold as the In Her Name Omnibus, and I shouldn’t have been surprised at any of the rejection letters I received from publishers: the manuscript was so huge that any editor trying to lift it would have been at risk for a hernia.

The omnibus draft sat under my desk until 2008, when I took advantage of the eBook revolution and published it on the Amazon Kindle, receiving a delightful shock when people not only began buying it, but actually liked it. The writing itself has been an enjoyable compulsion, but hearing that readers enjoy what I write has been a true and treasured gift.