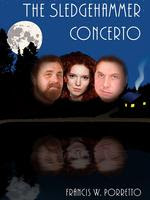 Three siblings: a mystic, with power to heal the wounds of the soul and dispel the anguish of the dying; a genius, who strove to bring human desire itself to heel, and succeeded beyond her hopes; and a visionary of freedom, whose depictions of courage in the face of oppression brought him a most unpleasant official notice.

They huddle in a cabin in the New York woods where they disclose the events that shattered their family. Rachel tells of her sexual abuse at her father's hands. Andrew tells of his quest for the priesthood, and the tactic his mother used to break his confidence. Devin tells how their parents destroyed what he prized most without laying a finger on him.

The highest accolade I can offer an author is to say I was able to read their story without seeing the words. This praise is due to Francis Porretto. Not only did I follow the story from within the text, but when I had to break from reading, it remained to the fore and I hurried back to continue.

This is the story of a family of adult siblings who have survived an abusive upbringing and rely heavily on each other to move forward in the world. As the name suggests, it is pitched as very much ‘three against the world’, with each movement given to a solo performance by one of the siblings, supported by the other two. The intermezzo is consistently a narration by Andrea Ducati, the illegitimate daughter of one of the brothers, and their only remaining descendant. Her previously unrecognized family history is given to her by her ‘uncle’ Devin, through his stories and from her father’s journals.

It is, however, as the name suggests, a sledgehammer concerto. The sledgehammer is the author’s political stance, which is put forward in deed and exposition: kill them or they will kill you. The message is not in any way subtle and includes a courtroom oration on the sanctity of the US constitution and the attempts of the state to wrest freedom from its subjects.

As masterful as the author is and leaving individual views on politics and morality aside, there are some points which jar. The psychology of abuse, as revealed, is simplistic. A violent death and the desecration of human remains go uninvestigated by police; the characters involved simply stroll out to the carpark and continue their conversation. A major plotline involving the deception of one sibling by the others plays false and leaves the reader feeling cheated when the lie is revealed. It is a cheap device used badly.

Perhaps most unfortunate is the decision to use different genres for each movement. The contrast is so marked I believe it must be deliberate, but I question whether it works well.

First Movement: Communion, is a family drama which concerns itself with the individual abuses suffered by the family members. Second Movement: Virgin's Prayer, is supernatural horror which I was reluctant to leave as it held great promise for a truly frightening and suspenseful tale. Third Movement: Last Rights, is a political courtroom drama, Fourth Movement: Source Code, is pure science fiction, and Fifth Movement: The Last  Green On The Willow, is a romance. Coda: The House Of Evening, is a dissertation on sin, death, false religion and redemption.

Whether you agree or disagree with the author’s views, I recommend Sledgehammer Concerto for anyone who likes to think about what they are reading.

Also from Francis Porretto:
Chosen One: A novel of passion and destiny
On Broken Wings: A novel of possibility
The Sledgehammer Concerto: A novel of speculation and reflection
Which Art In Hope: A novel of the far future
A Dash Of Spice: Erotica for Good People

About the author:  I was born in 1952. I have no excuse for that, sorry. As a boy I was fascinated by baseball and space travel. Unfortunately, my career opportunities were limited in both fields, so I took up mathematics and physics, and eventually became a real-time software engineer. However, being a wordy sort, I was moved to write, as well; so, at the tender age of 16, I blew my lawn-mowing money on a manual typewriter.  On Broken Wings, my first novel, was completed in 1997.  With the rise of electronic publishing and print-on-demand, my books are beginning to find a readership at long last. Apart from that: I enjoy a modest existence on the eastern end of Long Island in a creaky old ranch house, overfilled with books, that perpetually threatens to collapse on my head. I have two dogs  five cats  and a wife of surpassing patience who claims still to love me, after twenty years and against all the odds.