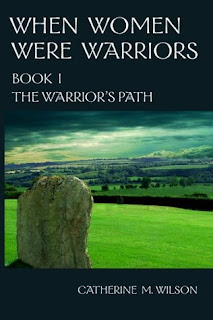 In book I of the ‘When Women Were Warriors’ trilogy Tamras arrives in Lady Merin’s house to begin her apprenticeship as a warrior. Her small stature makes her an unlikely swordswoman and to make matters worse Lady Merin assigns her as the servant of a cantankerous female warrior.

Tamras sets aside her disappointment and performs as well as she can the humble tasks given her. Eventually she succeeds in winning over her mistress. In the first year of her journey, Tamras will make a series of choices that often seem insignificant, but they will flow from her character and from her good intentions, and they will determine her destiny.

When Women Were Warriors reads like the journal of a young woman who lived in another era, where the ‘story’ comes from sharing the emotion and insight of a girl growing to womanhood. That sharing is done with great skill in a clear, lyrical style. It is a pleasure to read the prose, and the emotional connection with the heroine is compelling even if her journey is not.

Catherine Wilson has produced a beautifully written, very slow, gentle young adult coming-of-age tale. However, it has none of the elements I enjoy in a story. It has no beginning, middle or end; no dramatic tension, climax or conclusion. In fact, it has no conflict. It sets the scene and introduces characters ready for a story yet to be told.

The characters are the usual range of fantasy medieval women: the regal Lady of the manor; the wise old women with potions; the headstrong warriors; the painfully angst-ridden outsider; and the naive heroine, wise in her innocence and just a little bit magical. The physical relationships which are revealed are all lesbian, but the sex scenes are extremely mild, with no explicit description.

The day-to-day nature of the narrative saves this book from a single star rating from me, in that it can be read as if it were one journal of a set. It is not, as marketed, Book One of a trilogy. It is part one of a book sold in three sections. This, the first, is free in digital format. The other two parts, in which the story develops and concludes, are for sale.

All trilogies carry a story forward, but each book is self-contained in that there is a satisfactory conclusion to a conflict in each. There is no conflict or conclusion in this book. It ends at Chapter 27, and Book II begins with Chapter 28.

About the author:  I’m not all that fond of talking about myself, because I think you can learn most of the interesting things about me from my writing—from my books, my posts on various forums, and my blog, but I suppose a few hard facts are called for.
I am 66 years old. I live in California, the land of fruits and nuts. I am both.
My house is a mountain cabin in a redwood forest.
I always wanted a yard with a water feature, and now I have one, a stream that has not yet threatened to meander through my living room. I do not consider my leaky roof a water feature.
My neighbors are other recluses like myself, plus an assortment of wildlife , who are less reclusive than they used to be since I often leave food out for them.
I live with Oliver, a companion animal whom I hesitate to call a pet. He came in out of the cold one day and took up residence.