AMONG THE SONS OF SETH - JENNIFER L ARMSTRONG 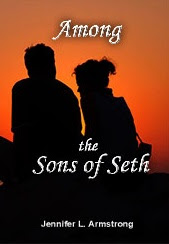 It is rumoured that Yah moves among the settlements of Seth.

Havilah lives and works in the first city, Enoch. Nearby, men toil in the copper mines; while her brother crafts exquisite pieces of bronze work that she and her sister will sell in the marketplace.

After a shocking revelation, Havilah realises her personal connection to the book of forgotten knowledge that has been kept in a neglected trunk by her family for as long as she can remember. Seeking deeper understanding, she will have to leave behind everything familiar and find Hawwa, the mother of all living.

I have read all of Jennifer Armstrong’s books with the exception of her children’s series, The Kent Family Adventures, and enjoyed each one. She has used different styles and voices in the dozen novels she has penned so far and seems to enjoy experimenting with the forms of her work. Among the Sons of Seth is her first foray into historical fiction.

As a basis for the story, she has taken two chapters from Genesis that even bible scholars tend to skip over. They are chapters five and six, one of the ‘begat’ lists - the generations from Adam to Noah. From this scant detail and her readings of the Book of Enoch she has fleshed out the Biblical equivalent of the myths of Atlantis.

Through the eyes of a young woman, Havilah, the story is told in the first person, present tense and begins in the city of Enoch, built by Cain on the 'Plains of Wandering', the land of Nod, east of Eden. Just as Havilah is promised to marry a stranger in town, a strong and wealthy man who would make her the envy of all the young women of her city, she learns that she is not the child of her mother Zillah but the orphaned daughter of a man from the among the sons of Seth.

Strange scrolls kept in a trunk at her brother’s house have always fascinated Havilah, and with the shock of learning about her heritage comes the overwhelming desire to know who her true people are. Leaving the promise of wealth and prestige for the dangers of a long journey alone through unknown lands, she sets out to find answers about who she really is and what it is to belong among the sons of God who were not banished from their family.

This is a time when men lived for centuries and, according to historian Josephus, had enormous numbers of children. They co-existed with mythical creatures and built great monuments. In her lifetime Havilah watched as civilizations rose steadily and the populations spread out across the world, and despaired as it began its inevitable slide into decay.

Havilah, renamed Baraka, tells her story as it happens with great immediacy and emotion. Her life and the truths she discovers; the births of her children and grandchildren; her journeys, her loves and her losses are all revealed against the backdrop of this ancient world.

It is difficult to say whether someone who is not at least sympathetic to Creationist theology would enjoy reading Among the Sons of Seth. It is very much like the bible stories we learned as children, revealing the great names of the Old Testament as real people with all the same day to day trials we recognize today. The author’s convictions are woven deeply through the fabric of the novel; I’m not sure it can be read as if it were intended as mere fiction. It is, perhaps, best described as an explanation of how life might have been for real people if they lived from the time of creation to the time of Noah’s great flood.

If you have no interest in or an aversion to these teachings, steer clear, it’s not for you.

Speaking to Christian readers who enjoy the opportunity to find stories not often told in mainstream literature, I can highly recommend this book. The author’s BA in Theology, her familiarity with ancient texts and modern discussion on the antediluvian world, and her passion for the warmth and simplicity of life and culture in the Holy Lands shines through. Her characters are well drawn and easy to love. She also manages to steer the story through centuries and multitudes of characters without bogging the reader down in the sheer weight of numbers.

The simple conversational style of writing makes it a winner and an excellent story to be read for younger children.

About the author: Jennifer L. Armstrong was educated at Ambassador College where she received a B.A. in Theology in 1993. It was also the setting for her first novel, The Society for the Betterment of Mankind. A summer archaeological dig at Hazor, Israel - combined with a tour of the Holy Land - started an interest in all things Middle Eastern. In 1999, she began publishing her novels online. Free Online Novels was launched to benefit both readers and writers.


Jennifer's novels include:
The Society for the Betterment of Mankind,
Somewhere Between Longview and Miami,
Last King of Damascus,
The Unlikely Association of Meg and Harry,
Death Among the Dinosaurs,
Prophet,
A Good Man,
Sami's Special Blend,
Among the Sons of Seth,
the Kent Family Adventures,
and Dreaming in Arabic, a chronicle of her experiences
in the Middle East and how they led to a change
in her perception of Israel and her Christian faith.